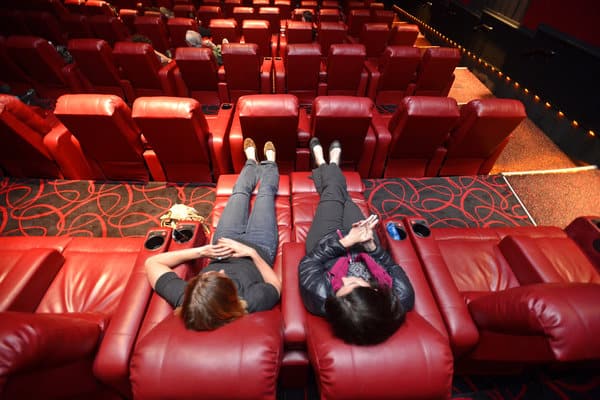 5 Reasons to Watch in Theaters and Not Online

These days, it is getting easier and easier for people to just download movies on the Internet and watch them for free. With so many torrent sites and online streaming sites available, so many people prefer to just stream movies instead of watching at the theater.

Yet there is the old adage that goes — there is no experience similar to watching in a big theater house. So why should you consider spending $15-20 to watch movies in theaters like Regal Cinemas or Carmike when movies are available for illegal download online?

Consider the top five reasons below:

You pay $15 at the theaters for the experience, not just for the one-time viewing of a movie. The experience you get with surround sound, a wide screen, and comfortable seats cannot be matched even by the best home theater systems.

Some movies are best seen in the theaters. There is just something different when the screen looms over your head and the sound booms from all sides.

When you watch movies off websites it is very likely you won’t even get a clear copy. When the movie is out in theaters, you shouldn’t expect DVD or Blu-Ray quality copies on the Internet for another four to six months so all you’re left with are poor pirated recordings.

Many pirated copies online have hard coded foreign language subtitles and many of them are poorly recorded (most of the time the illegal distributors use a hand-camera) and the audio is often unintelligible. So why settle for such a bad copy when you can get the full experience in the theater?

Reason #2 – Movies Depend on Profit

If you really liked a movie it is very likely you want to see a sequel. However, no matter how many times you watch the same movie online, no money goes to the studio that produced it. When a movie doesn’t do well at the box office, the producers don’t see any reason to green light a sequel.

Some movies, such as Dredd 3D, received favorable reviews from critics and the audience alike but because most people downloaded it instead of watching it in theaters it is losing its opportunity to get a sequel. The producers only see the numbers on the charts and so far the numbers are too low to support a sequel. After all, if the first one didn’t sell tickets then why would a second one?

It’s not just about sequels either. Many smaller films such as drama movies and art house movies are only produced because the bigger movies earned a lot for the production studio.

If a movie like the last Hunger Games film didn’t sell well then the production studio wouldn’t have the budget for a small project.

You know how streaming sites earn cash even you don’t pay to stream or download a film? Notice that there are so many pop-ups, click-ads, and banner ads. Simply clicking on any of those generates some cash for the host website.

If it was all just about click ads then perhaps it wouldn’t be much of an issue for you but unfortunately many of those advertisements have viruses. A single click is all it takes for your computer to be infested with malware and spyware.

Of course when you buy tickets online and watch a movie in a theater like AMC Theaters you are 100% guaranteed to be virus-free.

Ever tried to watch Jurassic Park on an iPad? The experience is not the same, even when you have a DVD copy in your hands. The dinosaurs don’t seem as big and the T-Rex doesn’t seem as intimidating. When you see the same movie on the big screen everything suddenly scales up.

Why else do you think Avatar racked up over $2 Billion even when there millions of people illegally downloading it on their computers? Why did The Avengers earn so much as well? The viewing experience is much different in the theaters and it is an experience you shouldn’t rob yourself of.

The next time a big movie is showing at your local theaters, why watch a chopped version of it on a small screen when you can appreciate the film in all its glory at the theaters?

Not every theater does this but don’t be surprised if your theater suddenly invites the stars or director of a particular movie. It is always a pleasant surprise to have the cast and crew talk about the movie to the audience before the flick starts playing.

Sometimes this becomes a good way to market a film and help the audience appreciate the movie more than they would have if the cast wasn’t around. Sometimes they do it as a sign of appreciation. Either way, you’d never get to meet the stars if you just downloaded the movie illegally.