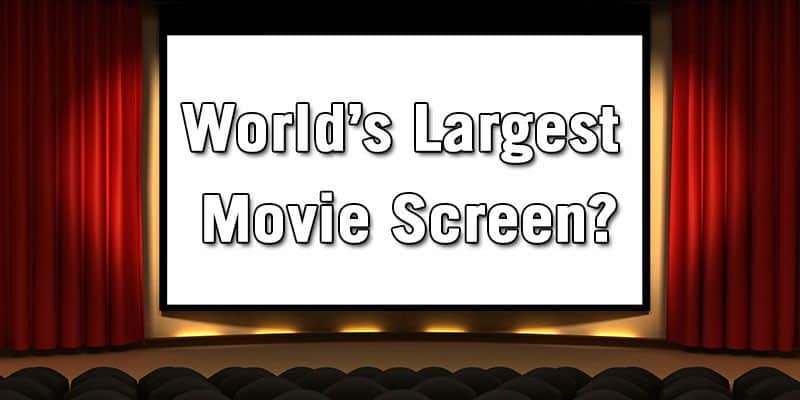 Which Country has the Biggest Movie Theater in the World?

We tackle only the biggest questions here at MovieTheaterPrices – and today’s a pretty damn big one! Join us in finding out where the biggest theaters in the world are located and just how large they actually are!

There are four categories we’ll be taking a look at:

Before we begin – how about taking a guess at how big the biggest cinema screen in the world actually is. 8m? 10m? 15m 30m?

Keep your answers in your head and let us know how close you were in the comments below!

What a question! We’re sure many people, even those who haven’t specifically searched for it, would love to find out the answer.

Ever since the introduction of movie-style cinemas in the 1920s, us modern movie-going humans have been fascinated by visiting the big screen whenever we can to catch a glimpse of the latest horror, drama, comedy, or whatever genre of movie we’re interested in.

Fun Fact – The Lumiere Brothers were the first people to project a motion picture to the public in 1895. Now known as the world’s first movie theater, the Salon Indien played a 20-minute program 10 times per day.

For some of us, seeing a movie on the largest cinema screen possible can mean all the difference between a good time, and having an unbelievably awesome time!

Unfortunately, sometimes we can’t simply head to the biggest movie screen in the world, so we have to opt for our local theater or home theater setup. Maybe, after reading this article and realizing just how big the biggest screen is in the world, you’ll be enticed to make the journey and see one of the latest action flicks – extreme style.

Whatever the case, let’s get into it!

Largest Movie Screen in the World

The largest screen surprisingly sits in China! Not Europe, not the US, not Australia – China! Specifically, its located in Suzhou, Jiangsu, China, which is just west of Shanghai.

China wasn’t the creators of the world’s largest cinema screen, though – they imported it! It was constructed in South Korea and brought over to China by Guangzhou Jinyi Media Corporation in 2015. It took just under a month to construct the behemoth.

Now, it comfortably holds the title of the largest cinema screen in the world.

Largest IMAX screen in the world

IMAX stands for IMAGE MAXIMUM. It provides a much more immersive audio and visual experience when viewing a movie or other style of film (it’s often used for documentaries). The major difference between IMAX screens and regular movie screens is the ratio of the width and height.

IMAX screens are generally more square looking, and have a smaller width to height ratio, whereas normal movie theaters are wider with a larger width to height ratio. Both have their positives and negatives in certain situations, it just depends on the type of movie being watched, and the experience the customer is after.

You’re heading down under! Pack your bags, get your sunscreen – you’re hopping on a plane to Melbourne, Australia.

As of 2017, the largest IMAX theater in the world sits in the Melbourne Museum. It measures 105 ft (32 m) wide by 75 ft (23 m) high. Surprised? You should be. It’s only recently taken the title as the largest IMAX screen after the previous holder in Sydney was closed for renovations.

We want to know – would you rather see a movie by yourself in your home, with close friends in the local – normal sized – cinemas, or head to the largest capacity cinema in the world and be in awe with hundreds of other people?

It’ll either be completely silent due to the fear of hundreds of people staring at you and your phone, or you’ll be hearing popcorn crunching, chip bag opening, mobile phone vibration noises for the whole time! We definitely know our answer, but hey! We’re as curious as you are as to how many people the largest movie theater in the world can hold.

Now, before we move on to the title holder, we need to make some clarifications. Many other articles across the web have gone and added up the total number of seats in a multiplex or megaplex – not here. We want to know where the highest capacity of seating is in the world for a single screen. We’re talking about everyone sitting in the same room, watching the same movie!

And we believe we’ve found it. Suprisingly, we’re heading back down under – to the same city as well – Melbourne.

The largest movie theater seating capacity is the Astor Theatre in Melbourne which seats 1,150 people.

The Astor Theatre has been in operation since its grand opening in 1936 and is the last single-screen cinema of its kind in Melbourne. That’s not all, its total capacity was 550 higher when it opened, being able to fit 1,700 movie goers. However, due to necessary renovations, capacity had to be reduced for other amenities.

Tell us The Astor Theatre doesn’t look like the exact theater used in King Kong’s scene.

Most number of cinemas in a multiplex/megaplex

There are many debates amongst the movie enthusiasts as to whether a multiplex turns into a megaplex after 14 screens, or only after 20 screens. Whichever the case, all we care about today is finding the largest number of movie screens in the same building!

For that, we’re heading out of Australia, and out of China. Instead, we’re staying right here in the great United States for this one.

The largest cinema complex in the world belongs to AMC Ontario. It comprises of 30 huge cinema screens under the same roof. Following its success, AMS has followed suite with many more complexes featuring 30 screens.

Heading back down under, the Marion Megaplex in Adelaide, South Australia comes in as a close second with 26 screens. It was originally poised to have 30 as well, but was modified to make room for Gold Class and V-Max screems as it was rebranded to Event Cinemas.

Opening in 1998, Kinepolis Madrid comes in as the worlds third largest cinema complex with a huge 25 screens under the same building. Each screen can sit between 211 and 996 people, with a total seating capacity for the whole complex hitting over 9,000.

Pretty awesome! 9,000 people in the same building all watching awesome new movies. What a business to be in!

Kinepolis fancy themselves as quite the cinema complex builders as well. Kinepolis in Antwerpen, Brussels, and Valencia all have 24 cinema screens each with total capacity ranging from 6,300 to 8,000.

There are so many more to list, but they’re all around the same numbers (25-30) so we thought we’d stick with a few of the highest.

Have you booked your flights? No? What are you waiting for?!!

Of course, remember to check the price of the movie tickets before you go – don’t want to get a nasty surprise when the tickets turn out to be double the cost!