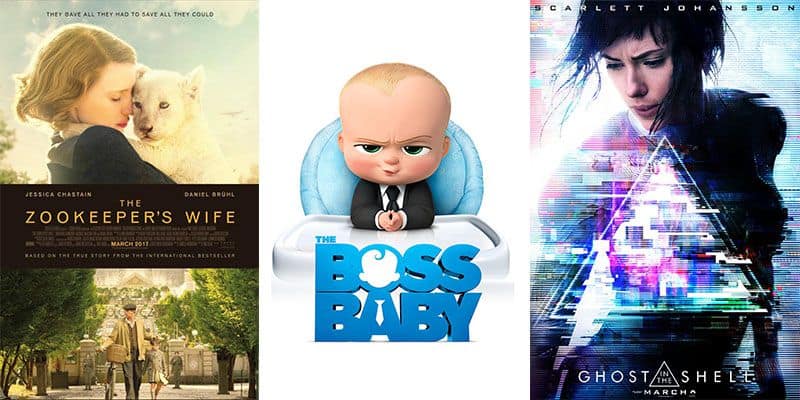 It’s the dawn of a new quarter – and some more movies of course!

Five new movies are being released this week in the US – two of them international films and a single animation.

They have some tough competition in their release with many of the early blockbusters still on the screens such as Beauty and the Beast, Power Rangers, and Kong: Skull Island.

Ghost in the Shell Anima and manga fans will be loving this one as it’s based on the Japanese manga going by the exact same name – Ghost in the Shell. It’s set in the near future where the inevitable starts to happen – the line between humans and robots blurs.

Ghost in the Shell (2017) follows a woman (Scarlett Johansson) who has her human brain transferred into a cyborg body and is now desperate to learn of her past. The movie has already been out for 2 weeks over in Japan (for obvious reasons) and will be released on the 31st March in the US.

Nearly 10 years has passed since the first talks of producing a live-action film adaptation of the manga started. Steven Spielberg managed to acquire the rights in 2008 along with DreamWorks. 6 years later, it was announced Rupert Sanders was now in line to direct the film with William Wheeler in control of the screenplay.

Originally, Margot Robbie was first considered to play the lead role, but just over a month later, DreamWorks made a formal offer to Scarlett Johansson for the part to the sum of $10 million.

Yau Ma Tei along with the Jordan areas in Hong Kong was used as film locations during the early parts of June 2016.

Ghost in the Shell has received mixed reviews across the three main sites. Rotten Tomatoes puts the film at 43%, IMDB at 6.9/10 and finally, Metacritic rates it slightly higher than Rotten Tomatoes with a 53% rating. An absolute all-star line-up of voice actors for The Boss Baby (2017). Check out the cast list below and you’ll find some huge names like Alec Baldwin, Steve Buscemi, Jimmy Kimmel, and Tobey Maguire amongst others.

The film itself it loosely based on a kid’s book written and illustrated by Marla Frazee – The Boss Baby. It’s been adapted into a movie by DreamWorks Animation with Tom McGrath heading up the position of lead director and Michael McCullers standing behind the script.

If we were to describe the film in one sentence or less, it would be this – The Boss Baby follows Theodore (Alec Baldwin) as he manages the secret war between babies and puppies determining who deserves more of the adult’s affection, all this whilst maintaining his secret identity as a secret agent.

Kevin Spacey was originally cast for a role in the film as well during the early announcement in 2014. It was until nearly 2 years later that he was to be replaced by Steven Buscemi for reasons unknown.

Filming took place virtually and no physical cameras were used in the final version of the film.

Let’s see how much of a bite The Bossy Baby will take out of The Lega Batman Movie.

IMDB’s users rate the film at 6.1/10, Rotten Tomatoes comes in at just under half with 49%, and Metacritic right in the middle at 50%. Third on the list, and the third movie to be adapted into one from another source. The Zookeeper’s Wife is based on the non-fiction book written by Diane Ackerman published in 2008. Angela Workman came through as the head of screenplay with Niki Caro behind the directing of the film.

The Zookeeper’s Wife takes place during the terrible time of when World War II first hit Poland. It follows the story of one of the largest zoos in Europe, Warsaw Zoo, and it’s employees during the initial raids by the German’s on Warsaw, Poland.

As such, the film premiered in Warsaw on March 8, 2017, where many praised the film as artistically beautiful. It went on to show in the Cinequest Film Festival on March 12 in San Jose, California.

The film has been 7 years in the making after Angela Workman announced in 2010 she was working on adapting the book by Diane Ackerman. 3 years later, Jessica Chastain joined the crew as the lead role with Niki Caro following soon after as the director.

Focus Features acquired the US rights to the film in 2015 where it soon announced the official release dates for March 31st, 2017.

Filming took place in Prague, Czech Republic, over the course of 3 months – September 2015 to November 2015.

Rotten Tomatoes currently rates the film at 59% whilst IMDB sits a bit higher at 7.1/10. A spin-off of the critically acclaimed Baby (2015), Naam Shabana is an Indian action spy-thriller film set as a prequel to Baby. Neeraj Pandey has been producing the film with Shivam Nair taking the lead role as director.

The film recounts the back-story of Shabana, an intelligence agent and her path on how she became a spy. It involves love, murder, global arms dealers, manhunts, and secret agencies. If that sounds like the sort of movie you’re interested in, why not expand your horizons a bit and see an Indian take on it?

Filming took place across multiple countries including Malaysia, and of course, India.

Naam Shabana has been filmed and produced extremely quickly. Principal photography started late in 2016 during September with the first schedule completed in October. Filming was completed in February 2017. Editors must have worked overtime to stick to the original release date of March 31st, 2017.

The movie currently has a rating of 6.8/10 on IMDB and a 33% rating from reviewers across at Rotten Tomatoes. One of the only films on the list in which it’s already been released in other countries more than a few months ago. Originally premiering in Belgium, Switzerland, and France on September 21st, 2016 – the film studios have chosen to only release Cezanne and I on March 31st, 2017.

The French film, originally titled Cézanne et moi, follows the friendship of Emila Zola, a novelist, and Paul Cezanne, a painter during the 19th century. The pair first met each other during their younger years in school and follows their creative rivalry over the course of their lives.

Danièle Thompson was chosen to write and direct the film, and it turns out he was the right person to do so. The film was one of four to be shortlisted for the French submission at the 89th Academy Awards for the Best Foreign Language Film.

Unfortunately, neither of the French films were to be nominated in the final running. With the Oscar going to The Salesman – an Iranian film directed by Asghar Farhadi.

Cezanne and I currently sits with a rating of 5.9/10 on IMDB and 50% over at Rotten Tomatoes.