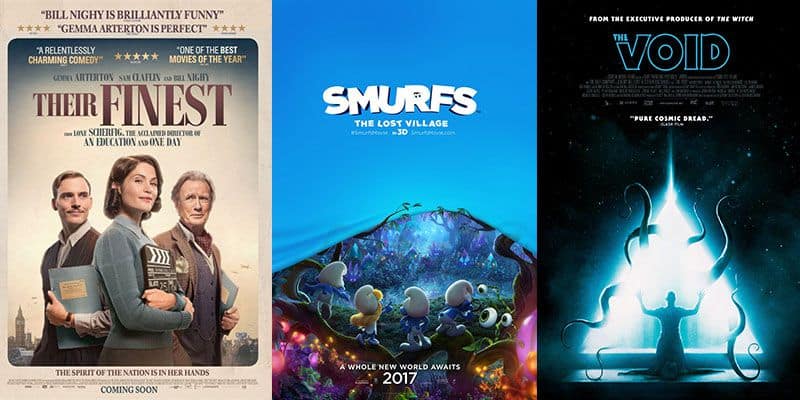 It’s the week of April 7th, 2017 – and there are plenty of new movies being released for you to check out over the weekend or the next week.

There’s something for everyone this week – romance, comedy, horror, documentary, war, biography, drama, and animation. No excuse not to get yourself down to your local cinema and enjoy yourself for a couple of hours.

Of course – make sure to check out of there are any coupons you can use to save on movie tickets! If you don’t know what a Smurf if, we must ask – have you been living under a tree? Smurfs: The Lost Village is the latest film based on the comic books created by Peyo. This movie, in particular, is a reboot film, completely unrelated to Sony’s previous takes on the Smurfs.

Surprisingly, the movie isn’t being released first in the United States, but rather, the first country able to watch Smurfs: The Lost Village was Russia! They were able to catch the film on the big screens from March 26th, 2017 – nearly two weeks ahead of the US.

As you’ll see below, there are some big names cast as voices for the tiny blue characters. Rainn Wilson, Julia Roberts, Demi Lovato, and Ariel Winter are just to name a few. Feel free to check out its IMBD page for the full cast.

Smurfs: The Lost Village follows the story of a few Smurfs and their companions setting out on an adventure following the discovery of a mysterious map. Their curious nature leads them on an exhilarating journey through the Forbidden Forest which little do they know, leads them to the biggest secret in all of Smurf history.

If you’re looking to keep the kids entertained or even after a bit of light hearted fun for yourself – this one is definitely worth checking out. Morgan Freeman is back, this time earning a role in Zach Braff’s new comedy – Going in Style. The story follows three older men falling on tough times, becoming desperate to provide for their families and keep the bills in check. Their lifelong friendships bring them to a crossroads and they embark on a risky plan to rob the same bank which absconded their money. How will the ending turn out? You’ll just have to find out!

If you’re a devoted movie fan, you may be aware that this 2017 movie is a reboot of the 1979 film – Going in Style starring George Burns, Art Carney, and Lee Strasberg. The reboot of the film was announced in 2012 by New Line Cinema along with Warner Bros. Don Scardino was originally hired to direct the film but was replaced by Zach Braff further down the track.

Filming started in early 2015 and took place across multiple locations including Brooklyn and Queens. Sources have projected the film to fetch around $8 million in its opening weekend to let’s see out it stacks up with the other in the list!

The Case for Christ Whether you’re interested in religion or not, you may find this movie quite interesting. The movie is based on the 1998 book by Lee Strobel which was inspired by a true story – The Case for Christ.

Similar to the book, the movie follows an investigative journalist and a self-proclaimed atheist on a journey to disprove the existence of God. Why are they after the end-all of truths? Because his wife has recently turned to the Christian faith.

Here’s a description of the book from Amazon:

Retracing his own spiritual journey from atheism to faith, Lee Strobel, former legal editor of the Chicago Tribune, cross-examines a dozen experts with doctorates from schools like Cambridge, Princeton, and Brandeis who are recognized authorities in their own fields.

Strobel challenges them with questions like, How reliable is the New Testament? Does evidence for Jesus exist outside the Bible? Is there any reason to believe the resurrection was an actual event?

Winner of the Gold Medallion Book Award and twice nominated for the Christian Book of the Year Award, Strobel’s tough, point-blank questions read like a captivating, fast-paced novel. But it’s not fiction. It’s a riveting quest for the truth about history’s most compelling figure.

The Case for Christ has been filmed in various towns of Georgie including Madison, Covington, and Atlanta. There was also a brief amount of filming done in Chicago.

The film currently doesn’t have any ratings on IMDB Despite its 2016 title on its IMDB page, Colossal is only being completely released to the big screens in April and May of 2017 around the world. However, it was featured in a number of film festivals in the back half of 2016 including the Toronto International Film Festival, Fantastic Fest, Sitges Film Festival, Sundance Film Festival, and the SXSW Film Festival.

Colossal follows the story of Gloria (played by Anne Hathaway) after the loses both her job and boyfriend in New York. She decides enough is enough and heads back to her hometown, only to discover the severe catastrophic events being played out on the other side of the world are somehow connected to her breakdown.

The film was nearly scrapped altogether before filming was enough started due to a lawsuit brought against them by a Japanese company, Toho. Toho alleged the company inappropriately used their trademark monster – Godzilla – in emails and press documents sent to potential investors for Colossal. Thankfully, a settlement was reached out of court in October 2015 and the movie was full steam ahead.

Filming took place in Vancouver, Canada, and Seoul, South Korea where it ended in later 2015.

Colossal sits at a comfortable rating of 6.6/10 on IMDB and Rotten Tomatoes users have to taken kindly to the unique film, rating it 77% overall. You may not know it, but beneath all the twerking and dougieing, there still exists vast communities around the world dedicated to the traditional dance styles. Today, Alive and Kicking is uncovering the dance world of Swing through and in-depth intimate documentary.

Susan Glatzer has taken control of the film through the director’s position, utilizing stars including Hilary Alexander and Evita Arca. Similar to Colossal above, Alive and Kicking premiered at the SXSW Film Festival in 2016, following which it was acquired by Magnolia Pictures.

The movie itself follows the origins of swing dancing in Harlem itself, its rebirth during the 1990s until today, and how such an artform has the ability to change people lives and purpose completely.

IMDB rates the film quite highly at 7.7/10 whilst Rotten Tomatoes quite a bit lower at just 48%. Chris Evans plays the protagonist, Frank Adler, in Gifted, along with his young niece. Mary Adler, played by Mckenna Grace. Frank is a now-single father raising his niece and his prodigy. Upon Mary showing unique mathematical abilities on her first day of school, Frank’s mother believes Mary holds a one in a billion talent which has been gifted to her.

2015 was a year of emergence for the film. March Webb was announced as director, Tom Flynn handling screenplay, and nearly all the rest of the cast joined as well. This will be Chris Evans first, and his only movie being released in 2017 – so if you’re a Chris Evans fan, we recommend you checking it out!

Filming for the movie took place solely in America with specific locations including Savannah, Georgie, as well as Tybee Island, Georgia.

Gifted was originally set for release next week on April 12th but has been pushed up for an April 7th release date.

Rotten Tomatoes has the film currently rated at 54%. We’re heading over to Romania for this one. Shot and filmed in Brasov County and Transylvania (yes, the real one) in Romania, Graduation was originally released in 2016 in its home country. The movie has gone on to be gradually released across multiple countries over 2016, and feature in more than a few film festivals.

Graduation follows the story of a young girl inspiring to study and live abroad and her father. Nearing her final exams, something terrible happens to her and her father must make sacrifices in order for her dreams to come true.

The film is critically acclaimed with Peter Bradshaw from the Guardian stating:

[Graduation is a] intricate, [and] deepy intelligent film.

It holds extremely high ratings from reviewers across multiple sites. IMDB currently rates it at 7.6/10 with Rotten Tomatoes swinging to the top of the scales at a solid 96%. Their Finest is based on the 2009 novel by Lissa Evans – Their Finest Hours and a Half. It’s a British romantic comedy written by Gaby Chiappe and directed by Lone Scherfig.

The film revolves World War II and the attempts to use propaganda as a way of boosting citizen and country morale following the Blitzkrieg. Blitzkrieg (“lightning war”) was coined in WWII by Heinz Guderian and it simply means to concentrate a vast amount of military power and arsenal into small, specific locations – thereby decimating the enemy and striking fear into their hearts.

It’s been filmed across a variety of locations in the United Kingdom. Specifically, the terrains in Pembrokeshire, Swansea, and London have been used. Filming in these areas began in early 2015 and was completed shortly after.

Users on Rotten Tomatoes has taken kindly to the film, rating it 89%, with IMDB at a similar number of 7.2/10. If you like The Thing, you’ll definitely be interested in checking out this new release – The Void. Before you turn away, check out the trailer below and see how you go. It may be a bit too intense for some, it is a horror after all. But for others, it’s likely right down your alley.

We’ll leave you with the description from IMDB as we don’t want to give too much away:

Shortly after delivering a patient to an understaffed hospital, a police officer experiences strange and violent occurrences seemingly linked to a group of mysterious hooded figures.

The Void premiered in 2016 at Fantastic Fest and went on to feature in a number of other film festivals including the Abertoir Horror Festival. It’s only being officially released into the cinemas in three countries – UK, USA, and Singapore. So count yourselves lucky if you’re in them at the moment!

Despite its wickedly incessant horror themes, the movie has received quite pleasing results across online rating platforms. IMDB sits it at an even 6.0/10 and Rotten Tomatoes slightly higher with a 76% rating.

SHOT! The Psycho-Spiritual Mantra of Rock Journey deep into the mind of one of Rock & Roll’s greatest ever living photographers – Mick Rock. What an appropriate name! The documentary/biography takes a look at the other side of the camera – the ones standing behind it.

Follow Mick’s life as he travels the world from London to NYC photographing some of rock’s most famous icons. David Bowie, Syd Barret, Blondie, Queen, Lou Reed, and Iggy Pop are just a few of the iconic names you’ll find along the journey.

The film has been filmed across both the USA and the UK. It first premiered in the UK during the London Film Festival, it then went on to be played in a number of other festivals including the International Documentary Filmfestival Amsterdam and the Cleveland International Film Festival.

IMDB rates the documentary quite highly at 7.9/10, similar to Rotten Tomatoes who rates the film at an even 80%