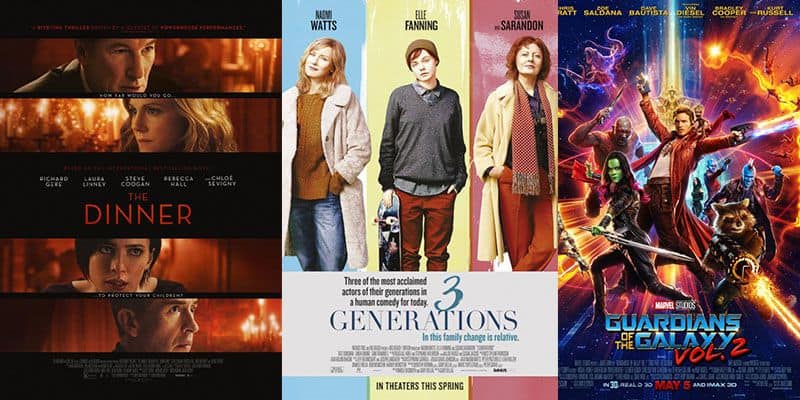 After a brief 2-week hiatus of new blockbusters on our screens, we’re back! We know you’re going to enjoy the main release this week, and they just about have the whole week all to themselves!

Guardians of the Galaxy Vol. 2 is surely going to reign king as the most watched movie over the coming weekend.

There are four new movies coming out this week, feel free to check out all their trailers below. We specifically chose the ones which revealed as much as possible without giving away any spoilers. Enjoy!

Guardians of the Galaxy Vol. 2 Volume 2 heading to a cinema near you! Chris Pratt and his band of saviors take on the deepest darkest creatures the universe has to spit out once more. Groot is his usual comedic self as you’ll come to see in the trailer below.

Us Americans are damn lucky! We get to catch it on the big screens a whole week before the rest of the world! A long lasting married couple has found themselves drifting away from each other and eventually both dabbling in a few extracurricular activities, if you know what we mean.

Strikingly, drifting apart has caused them to drift back together!

The Lovers is a classic comedy/drama, check it out if you’re up for some light entertainment. You’ll be guaranteed a few extra laughs in your day. Based on the novel by Herman Kock, The Dinner is a drama/thriller depicting one intricate family, a terrible act by the children, and how far their parents will go to protect them.

The cast list contains a few extraordinarily fantastic actors including Richard Gere, Laura Linney, and Steve Coogan, who you may know as Littlefinger/Lord Petyr Baelish from Game of Thrones. He’s conniving here, but not where near as much as his GoT times.

Its world premiere occurred at the Berlin International Film Festival earlier this year in February and is now set for a USA release on the 5th of May. Capitalizing on the current LBGT trend the western cultures are experiencing, 3 Generations depicts the lives of a Grandmother, her daughter, and her daughter’s daughter, or so it seems.

The drama/comedy takes a look at what it’s like to transition from male to female, or at least what the directors believe it’s like.

Many comments on the trailer are a bit peeved at the fact they couldn’t cast a real trans as the character in question, furthering the sense the movie isn’t truly authentic.