Regal Cinemas have some of the most well-priced movie tickets in the United States. As one of the largest cinema chains in the country, it also comes in as one of the most highly rated in terms of their prices and quality. Plus they are pioneering some of the most groundbreaking theatre experiences including RPX, ScreenX, and 4DX.

Want to buy tickets now? Get great prices at Fandango. 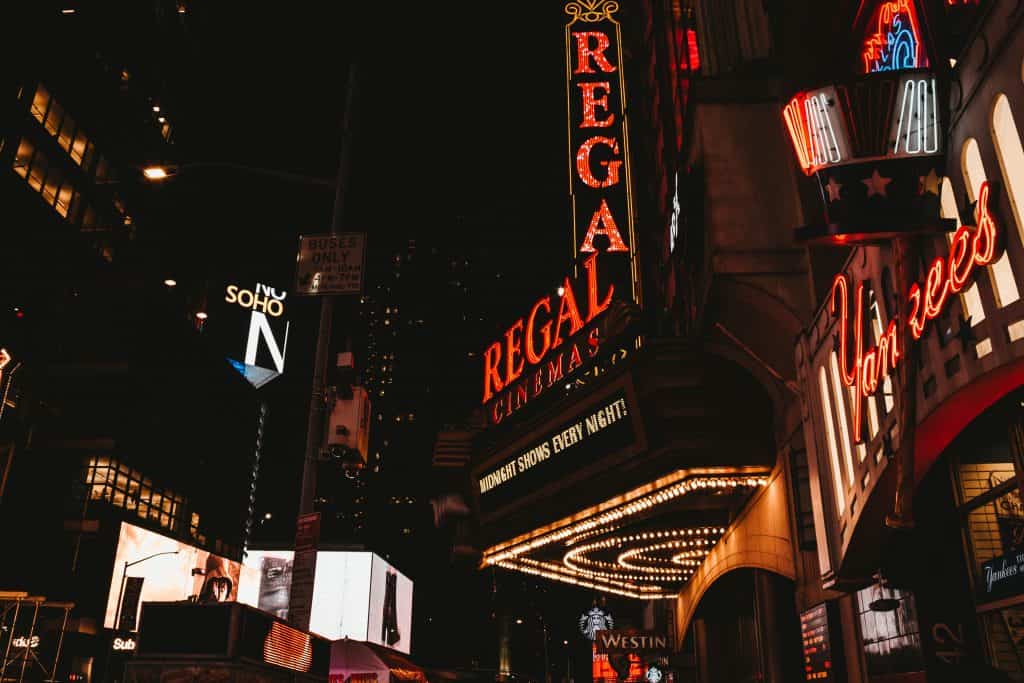 Below are latest Regal cinema prices.

Please contact your local cinema for specific pricing for the date and times you are looking for. They also offer some of the best pricing options with discounts for seniors, students, and members of the military.

Since there are hundreds of cinema locations, the Regal movie ticket prices listed in the table below are only of a general nature. 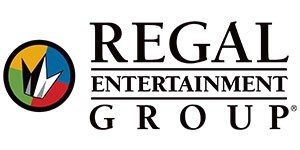 Regal cinemas as it’s known today started only in 1989. No longer does Regal stand on its own, but rather it’s joined together with two other chains – Edwards Theaters and United Artists Theaters. All three cinema brands are owned and operated by a single parent company – Regal Entertainment Group.

Edwards Theaters was founded in 1930 by William James Edwards Jr. It was a family owned business primarily run in California. After achieving magnificent popularity amongst movie goers, they Edwards Theaters were able to host, for a brief period, prime time movie premieres for a few of the latest Hollywood blockbusters.

Unfortunately, Edwards passed away in 1997 and was succeeded by his son, William James Edwards III. By that time of his death, there were over 90 Edwards cinemas in the country, boasting well over 500 screens. His successor was quick to announce a massive expansion, intending to double the size of the company.

However, it was not to be realized. This rushed expansion brought the company to sudden bankruptcy in the year 2000.

United Artists Theaters is closely linked to the United Artists film production company of which Charlie Chaplin himself was a part of. The theater chain was opened in 1924 and was headed by Joseph Schenck.

Originally part of UA Studios, the company began to drift away and become its own company. By the 1970s it was a part of the United Artists Communications group.

The company switched hands time and time again following the late 70s. TCI or Tele-Communications Inc. were to first to acquire it, followed by Merrill Lynch Capital Partners Inc. as well as several United Artists management members who became the owners in 1992.

Regal Cinemas, as we mentioned, was only founded more recently in 1989 of which Mike Campbell held the reigns as the first CEO. Back then, Regal focused on a more elegant look (hence the name “Regal”) and each branch also featured a high-class café, known as Café Del Moro.

During the late 1990s, Regal Cinemas began to expand, gobbling up competing and smaller cinema chains around the US, as well as building its own modern multiplexes. However, Regal was soon to face the same fate as the other cinema chains of the time. Caused by overextending and the colossal debts taken on for their acquisitions.

Thankfully, there was an angel waiting. And the angel’s name was Phillip Anschutz. Phillip bought into all three cinemas, becoming the majority owner in all after they all filed for bankruptcy. Come 2002, Phillip announced his plans to combine all three chains to be run under a single parent – Regal Entertainment Group – which it remains today.

Mike Campbell of Regal Cinemas became the cinema overseer and was a co-CEO along with Kurt Hall from United Artists, who was given the task of managing the new subsidiary, Regal Cinemedia.

Regal Entertainment Group has gone on to acquire more cinema chains in the United States. Including acquiring Consolidated Theatre’s 28 locations in 2008 for $210 million, and Hollywood Theater’s 46 locations in 2013 for $191 million.

Today, the Regal Entertainment Group is one of the largest cinema chains in the world, operating over 7,000 screens in more than 500 different locations. It’s currently headquartered in Halls Crosswords, Tennesee.

The Regal Foundation is one of the largest not-for-profit charitable organizations run by a cinema in the world. Originally founded in 2003, the foundation partners with a number of other organizations around the county. A few include:

You can find out more on the Regal Foundation’s activities here. Regal are currently undertaking a request for customer donations in order to assist them and help give back to those in need. Stars of Hope is its current name, you can donate here if you wish.

Regal Cinemas consistently take the lead in being one of the early adopters of the latest cinema audio and visual technology. Before the world even knew about 4k resolution, Regal had already signed a deal with Sony to equip every single one of its locations with 4k digital projectors over the next five years starting from 2009.

As it’s 2017, five years has passed and their deal has been successful. All Regal Cinema locations run 4k resolution digital projectors, the best in the industry.

Of course, it’s not the 1900s anymore, and no cinema is complete without a sound system. Which is why you’ll be thankful many of their cinemas are fitted with the Dolby ATMOS system. Why is this special? Because Dolby ATMOS allows the movie to fill the cinema will 360-degrees of sound, transporting you into a completely immersive experience.

We’re sure you’re no stranger to IMAX, and if you are, we’re going to convince you to change your ways. Over 89 Regal locations are now fitted with fully fledged IMAX screens, with many of them offering a 3D experience on top. We’ll let a single Youtube video do the talking, check this out, and tell us you still aren’t keen on checking out an IMAX movie.

To top of this amazing list, we’re going to introduce you to the absolute latest innovation in the movie scene – 4DX. Sure, 4k projection and 3D are pretty damn awesome, but once you watch the video below, your mind may be blown.

P.S. We know the video is from Cineworld, but overview take on 4DX is far better than Regal’s, even though the same technology is used.

How Much Do Regal Cinema Tickets Cost?

Regal theater ticket prices, you may have noticed, are a little above the average ticket price offered by other theater chains. The reason why Regal theater prices are higher is simply because of the higher quality movie experience (as you’ll not from the list of advanced technology above) and for their overall cinema atmosphere. No other theater offers the comfort and quality Regal cinemas can provide.

For specific pricing on your local Regal Cinema tickets, we recommend you head to Fandango or call your local cinema. Regal doesn’t have their own online purchasing system, but rather they’ve gone with fully outsourcing all of the operations to Fandango. However, you can buy bulk discount tickets through Regal’s site, which we’ll discuss below.

Military, Student, and other discounts

Many Regal Cinemas offer exclusive discounts for both active military personnel and students with valid IDs. Unfortunately, Regal aren’t too keen on sharing which locations offer them, or specifically how much the discounts are.

Browsing their FAQ page leads us to the following answer:

For student and military discount availability, please enter your zip code under the “Find Tickets and Showtimes” section of the homepage. Scroll down to the theatre you plan to visit, and click on the theatre name. At that point, locate the movie you are inquiring about and click on the gold showtime. The page that is presented will provide you with pricing information, as well as student and military discount availability.

Not much help, unfortunately! We recommend you call up a few of the Regal’s near you and confirm over the phone or in person whether they provide discounts for military or students, whichever you’re after.

On the other hand, Regal are proud to be part of the worldwide move to offer extremely discounted tickets on select days at select locations. Here is just a few example of the discounted days:

As you can see, you could be saving nearly 50% of the cost of a regular priced ticket if you visit the cinema on their special offer day. For all the participating cinemas, as well as the specific discounts they offer, click here.

You’ve likely heard of Costco, and if you haven’t, one of their main incentives to shop there is to buy in bulk and save. Regal have a similar offer. Through their special website, you’re able to buy bulk tickets of Premiere Movie Tickets or Ultimate Movie Packs.

For more information on either, as well as how to purchase them, see here.

Many companies in many different industries around the world have incorporated some sort of loyalty or rewards program to entice their customers to keep coming back. And Regal is no different.

The Regal Crown Club offers members a range of opportunities to earn points through purchases and then claim certain rewards for those points.

Specifically, for every dollar spend on tickets and concessions, you’ll earn 100 credits. You can then use those credits to claim rewards. Here are a few of the rewards currently on offer:

Joining the Regal Crown Club is completely free and you can sign up in-person at a cinema, or through their app.

As we’ve mentioned, Regal Entertainment Group has over 564 cinemas operating under its three main brands. And far more than half of those operate solely under the Regal Cinema brand.

So, we went on a mini-mission to find out which of these cinemas are the most popular ones in the company. And we think we did it.

Here are a few of the most popular Regal Cinema locations we were able to find:

As you can see from their highly satisfied customers, Regal are surely doing something right in the cinema industry to be consistently receiving them.

We took a look at a few of the reviews, here are a couple of the most recent:

This is one of the most impressive movie theaters I’ve ever been in, and I’ve been in A LOT of theaters. First off, it is simply massive, both the overall building and the individual theaters. It is fancy and can be used for various social events. If I make back to this area of L. A. again, I’ll be sure to catch another film here. – Josh E.

Having lived in DTLA for over 11 years, it is so wonderful to finally have a high-quality theatre within walking, bike, or quick bus distance. The auditoriums are all great, the seating, picture and sound quality is top notch, and the staff are consistently first rate. $8 Tuesdays rule my world, I try to see a movie every week. Great rewards program as well. Thanks, Regal, you’ve knocked it out of the park! – Bryan Middleton

There are so much more beyond those two, which you’ll just have to discover yourself if you’re interested.

Across the states at over 580 locations, you’ll be pleased to know a cinema operated by the Regal Entertainment Group will be there, waiting. Waiting for you to swing by, and check out one of the latest movie blockbusters at their well-rounded ticket prices, whilst enjoying the state-of-the-art technology and ultra-comfortable seats.

That’s not all, Regal theater ticket prices are generally far more competitive in terms of value when compared to the company’s main rivals, namely AMC and Cineplex. Still, Regal remains as one of the leading innovators in the cinema scene.

If you’re lucky enough to already be near a Regal Cinema, we highly recommend you give them a shot – it’ll be worth the money! Especially if you go on a discount ticket day!

For more information about Regal Theaters, visit their official website.